Hello! My name is Shalynn Pack. My husband, Adam, and I are proud sponsors of Angelina (10), a bright young girl from Colombia; Kenny (16), a smart, serious teen from Ecuador; and formerly Bernardita (17) a kind, shy girl from Chile.

Adam and I started sponsoring with Children International in 2009 as young college students, in love and scraping by from paycheck to paycheck. I’ll be honest that I had my doubts when I first signed up — would this monthly check actually go to the kids? Could we really afford to be donating at the time? But, the cheery, passionate CI volunteer convinced us to sign up, and I promised to not buy any coffee or sweets on campus to make up the difference in my bank account.

We became hooked when we started writing letters to our sponsored kiddos. We have learned so much about them through our correspondence:

After several years of writing to each other, we knew we had to meet the kids in person, and so began our grand adventure!

Head over to Adam’s personal blog for his take on meeting Kenny.

When Adam and I graduated college in 2010, we planned our big trip — a six-month excursion that would take us from Ecuador to Chile. We could visit Kenny in Guayaquil when we arrived and Bernardita in Valparaíso when we left the continent. We visited Kenny within our first week of the big adventure. 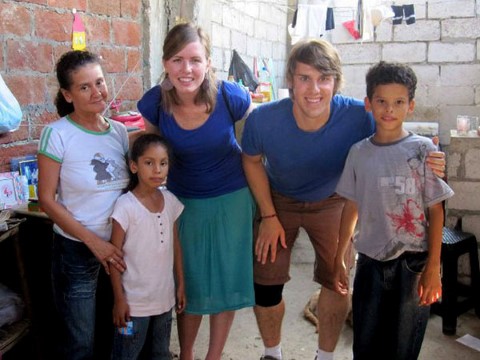 Shalynn and Adam meet Kenny’s family at their home in Guayaquil.

Upon setting foot on the CI campus in Guayaquil, Ecuador, we were humbled and thrilled. CI staff introduced us to Kenny while he was in computer class at the community center. Then 10 years old, he was so shy and excited! We also met his mom and sister in their home, which had a tin roof, one shelf and one bed for the three of them. We were incredibly humbled when Kenny showed us one of his only possessions: a book of all the photos Adam had sent him. 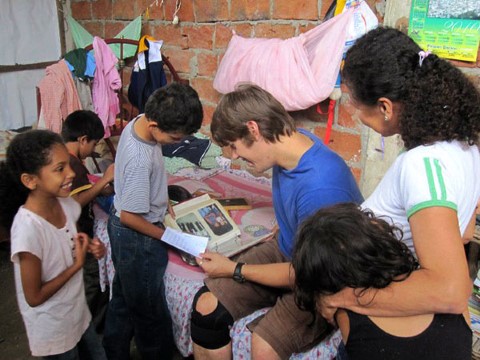 Kenny shares a treasured item with Adam — the book of photos Adam had sent Kenny along with his letters.

Five months later, after many adventures and an amazing marriage proposal in Machu Picchu (nice job, Adam!), we landed in Valparaíso, Chile, to meet Bernardita, then 11. She was so polite, kind and shy at our first meeting.

It was amazing to see her open up as we played arcade games together, walked on the beach and visited her home outside the city. The two-room space housed her grandma, grandpa, little cousin and her mother, who needs constant care due to a developmental disability. 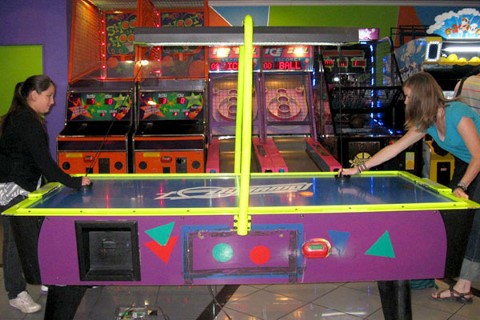 Bernardita and her sponsor, Shalynn, bonded over a friendly game of air hockey.

While Bernardita’s grandma baked bread for us in their stone oven, Bernardita showed me her family’s photo album. It told a story of economic security and then loss after her father passed away.

Once again, we were brought to tears when Bernardita showed us the photos we had sent, which were pinned to her wall as one of her only decorations.

In the afternoon, we walked through the family’s backyard forest and picked blackberries, savoring the last sweetness of our wonderful visit and the end of our six-month traveling adventure. 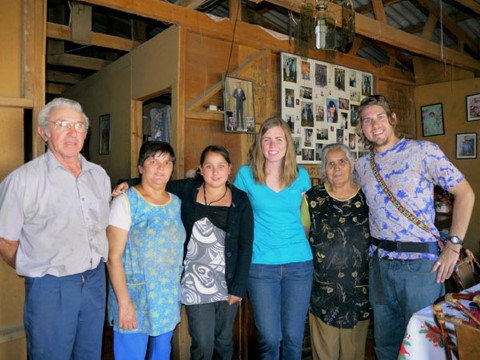 In 2015, after five years of working and graduate school, Adam and I had saved up enough money for a winter trip to Colombia. We’d heard of its beautiful beaches, dense jungles and vibrant salsa-dancing culture, but we were mainly drawn by the fact that Angelina was there.

I could tell by her letters that she was a bright and eager girl — within days of receiving letters, she would respond with elaborate drawings of the wildlife and wild places I had written to her about. 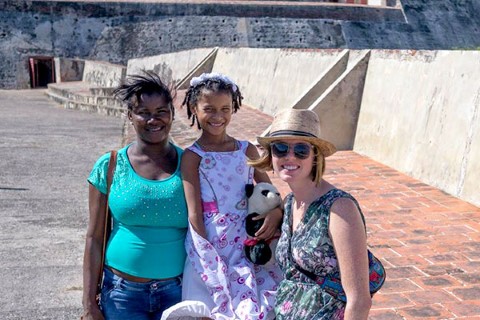 As we flew into the sprawling, old-walled city of Cartagena, I tried to guess what part of the city she lived in and what her life was like there. We wouldn’t be able to visit her home; Angelina’s neighborhood is too dangerous to visit on a weekend. I could only guess what that fact meant in her daily life as a 9-year-old.

The next day, Angelina bounced into our lives in physical form as the friendliest, most eager and smartest little girl in the whole city. Angelina’s mom had curled her hair and placed a flowery headband on her head to match her starched, white Sunday dress. Angelina wasn’t shy in the least — in fact, she was more chatty than her mother, who was kind, quiet and obviously strong. 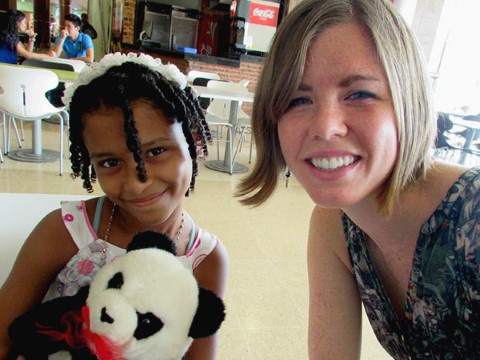 “Angelina bounced into our lives in physical form as the friendliest, most eager and smartest little girl in the whole city,” says sponsor Shalynn.

We learned that, when Angelina was just a baby, her mom moved them to Cartagena to find a better life; their home on Colombia’s Pacific coast is a region with few economic opportunities, minimal infrastructure and heavy drug trafficking. They had been building a life in the city for the past few years, and her mom was giving Angelina a wonderful childhood. The sweet girl was excelling in school and had good friends.

During our visit, I gave Angelina a stuffed panda that I had loved as a child. Her eyes gleamed. She carried “Panda” everywhere we went — to the local mall where we ate ice cream and to Cartagena’s famous castle, where we explored every inch. Angelina sprang up the steep castle walls, alternating between jumping up for hugs and standing stoically at the edge of the castle, looking out over her city. 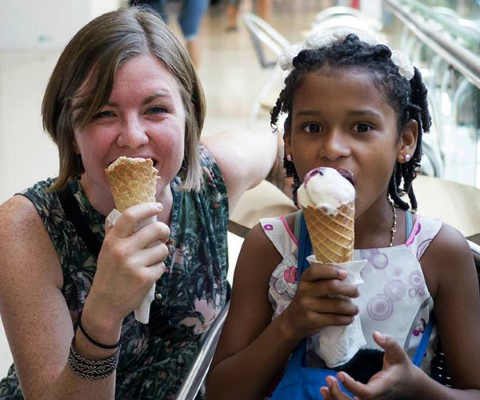 Shalynn and Angelina enjoyed a sweet snack before sightseeing in Cartagena.

Now, in all of her letters, her drawings include sketches of “Panda” playing with her on the beach, climbing around her house and studying for school.

The best decision we ever made

When we first signed on as sponsors, we knew it was the right thing to do — sharing the wealth and bounty we’d had the luck to be born into was important. So much of the world has so little while we have so much.

Over time, however, I’ve come to see that it’s not so much about the money our sponsored children receive but the relationship and love that we build between the other.

Although the social services sponsored kids receive are crucial to their safety and development, the fact that they know there is someone across the world who cares deeply about them is just as important. 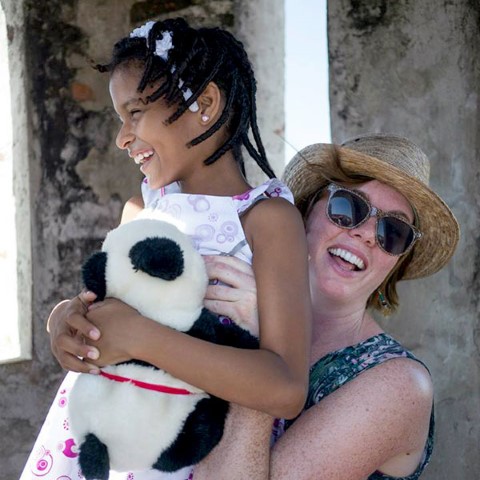 “It’s not so much about the money our sponsored children receive, but the relationship and love that we build between the other,” Shalynn writes.

One person can make all the difference for a child across the globe by showing her that she is special, loved and encouraged to become her best self.

Children International is living proof that, although helping just one person can seem like a drop in the ocean, that drop can be a person’s whole world. In this way, one by one, passing on love and support, we will change the world for the better.

We’re so thankful for amazing sponsors like Shalynn. Meet another of our favorite people!

What an amazing story...thank you for sharing your sponsorship story and showing others how important and rewarding it can be for both sponsor and sponsored child!

I’ve sponsored 7 children through the years and right now 4. Archie is amazing and writes such great letters & he feels like part of our family. Lhenz is reserved but a bright and happy child. Joseph is younger and always has a smile on his face and Mary has never written a letter to me only her grandmother has & Mary is old enough to write to us but chooses not too. You don’t have the same connection with a child who refuses to write her own letter. That has made me sad & I’ve asked many times. She’ll draw us a picture and we are happy she will at least do that. I’d love to visit at least Archie but all if possible. I don’t think we could afford the trip. But our communication and help will always be there for these children.

Beautiful stories and blessings to the Sponsors.

What a beautiful story you shared of your three children you sponsor! I have sponsored many children but my most recent was Clement from Zambia who graduated high school and is now attending college and Brithany 18 from Quito and Geremy 18 from Dominican Republic. Brithany just graduated from high school both her & Geremy will soon be 19 and out of the program. I went to Dominican Republic Santo Domingo where I met Geremy & his Mother. It has been a joy to sponsor these beautiful children!

Loved reading about your trips. I have sponsored 2 children this year in Columbia and I hope to meet them in the future. They are both 16

Very inspiring and thanks for sharing your experience!

Wow! This has touched my heart and encouraged me to
Keep going with my donation. I know what God has clases me to do but sometimes the negative voices can weigh in our minds. Thank you for sharing such a detailed experience. So grateful! God bless and keep using you for His glory!