From hardship to healing

UPDATE: Daniel Tua’s family is an exception among those in the neighborhood in Quito, Ecuador, where he grew up. While many parents don’t understand the importance of an education, Daniel’s mother and father supported his efforts. In fact, not only did Daniel attend school far past the age when many of his peers drop out, but Daniel’s parents encouraged him when he wanted to go further — much further. To medical school!

As a result, today, Daniel is a doctor. And his recognition of education’s value is so high that he wanted us to make it clear just how critical his parents were in helping him to pursue his goal. So, keep reading to discover just how exceptional Daniel’s parents were in helping to pursue his dream — and how his story began as a little boy growing up in one of the most dangerous areas of Quito.

What could give a child living in poverty the strength and determination to dream of becoming a physician? The answer seems surprisingly small: A pencil.

“A pencil in my home changed everything,” says Daniel, now in his mid-20s, as he recalls the aspirations he had as a child. When he was 6, his family was going through a particularly difficult time. He’d just begun formally attending school, and he remembers asking for a pencil to do some work. They didn’t have a single writing utensil in the house.

Shortly before his ninth birthday, however, Daniel gained a sponsor through Children International, and such impediments to learning disappeared. “I received notebooks, pencils — all sorts of study materials,” Daniel says. “And it wasn’t only for me. I received a lot that I could share with my sisters.”

A life of limitations

Daniel grew up in “The Hive” (La Colmena), a dangerous area of Quito, Ecuador, known as a Red Zone. Such neighborhoods are recognized hubs of gang activity and crime. They are so plagued by poverty and lawlessness, in fact, that police won’t enter them, and many employers won’t interview residents whose addresses fall within them.

But such negative forces were offset by some powerful positive ones — most of which were available thanks to the services and opportunities of sponsorship. Some of Daniel’s fondest childhood memories, in fact, revolve around time spent in CI’s community center. He recalls the medical care, clothing, shoes, school supplies, tutoring and other benefits with a deep sense of gratitude. At the time he graduated from sponsorship, his family existed on only about $13 a day — the combined wages of his parents’ work as a maid and tailor. With such meager income, the smallest of gifts meant more to the family of five than most of us can imagine. 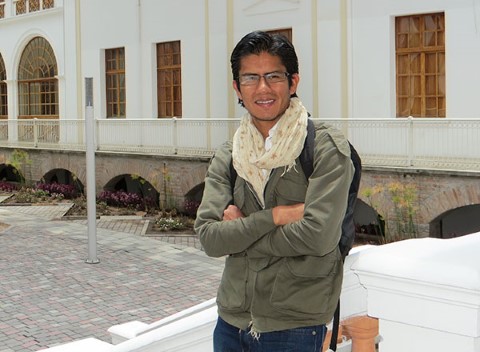 Grateful for the opportunities sponsorship afforded him, Daniel hopes to return to La Colmena after his internship in order to give back.

“Children International helped me and my sisters when we needed it the most,” Daniel says. “They gave us what my parents couldn’t afford.” If not for the school supplies he received, for example, he says he probably would have been forced to drop out of school at an early age. He adds that the encouragement and tutoring assistance he found at the community center were similarly critical to his success.

Daniel describes how he vividly remembers one time in particular, during his early teens, that had a significant impact on the trajectory of his life. Again, a pencil served an important role. While writing a letter to his sponsor, he was stumped for a topic. A volunteer mother, who was guiding the children’s efforts that day, suggested that Daniel write about his dreams. Later, after seeing them on paper, he realized that his dreams weren’t beyond his reach. He could make them a reality.

Daniel says he has long been drawn toward helping others, a trait that his father seemed to always exhibit. Combined with his good study habits — and the inspiration of a poverty-stricken uncle who managed to become a paramedic — Daniel set his sights on a career as a doctor.

After visualizing his future, Daniel joined several of CI’s youth programs. He was eventually elected to serve on his agency’s Youth Council. As a result of his participation, he gained a variety of valuable skills that helped him later in life, such as public speaking, the importance of being responsible and reliable, and the ability to compromise.

Upon graduating from the sponsorship program, the young man earned a scholarship, making it possible for him to attend college.

Today, Daniel’s dreams are nearing reality. He recently received a medical degree. By 2016, he will complete his required one-year medical internship. At that time, he will begin practicing medicine, officially, as a fully accredited physician.

“I’m going to be a doctor soon, thanks to the help of CI,” he says with gratitude — a bit of incredulity in his voice.

Daniel’s aspirations — in addition to helping his family financially — include returning to La Colmena, hoping to transform the lives of others — just as his has been transformed.

“Without CI,” Daniel adds, “I would not be where I am right now.”

You can help kids just like Daniel achieve their dreams.