Why letters take so long!

While visiting CI's central office in Guatemala City, Guatemala, over the summer, I noticed a couple of wrapped packets on a table ...

... then I spotted another packet ... and another. I gathered all the packets into a pile to get a better understanding of the situation. These were thin sheets of paper — and they were child letters waiting to be translated!

How many letters were in each packet — 2,000? 5,000? Maybe 10,000? CI should give a prize to whoever can guess the closest. Point being, this is a heckuvalotta letters! I can't even imagine how long it would take to type a translation on the bottom of each one — I get exhausted just looking at that stack. 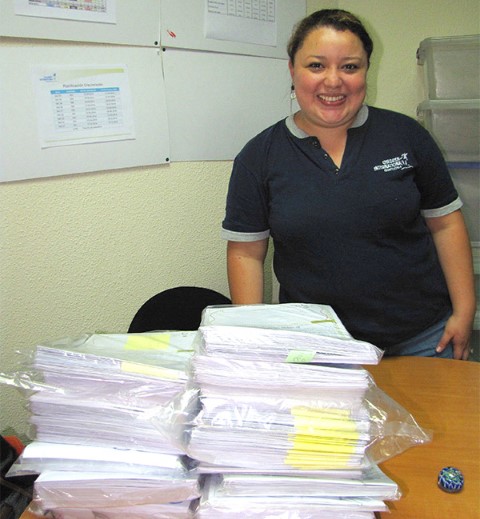 A staff member offers a visual on the ginormous pile of child letters waiting to be translated and processed.

So, try to be patient when waiting for your letters, and forgive the translation errors and omissions. If the staff doesn't work fast, they'll NEVER get the job done. Keep in mind, there might also be a sponsor in the country going out on child visits for a couple of days in a row and pulling the staff away from their office duties. It slows down the well-oiled machine when we insist on visiting. So thanks, CI, for being so friendly and supportive when we do it anyway!

Mckenzie Fritch (aka MackyMack) has been a Children International sponsor since 2008 and sponsors 13 children. She belongs to four sponsorship groups and is a foster sponsor to two Guatemalan girls. (Their sponsor passed away, so she visits them and sends letters/gifts.) MackyMack has been on 44 child visits — we'd say she's a superstar sponsor!