A Spanish teacher brings her students to Honduras to visit two boys she's sponsored and rediscover what she loves so much about Latin America.

Mary has always felt a special kinship with the people of Latin America. She calls herself "American by birth, Latin American by heart" and has kept her passion alive by visiting countries in Central and South America — and by choosing a career as a high school Spanish teacher. And since 2003, she's kept a living link to Latin America through sponsorship.

In 2003, Mary became the sponsor of a Honduran boy named Edgar. When he left the program six years later, she began sponsoring a 5-year-old boy named Walter. Now, after two years, Mary decided to travel to Honduras and meet Walter, and hopefully Edgar, too. And she wouldn't come alone. Mary brought along seven of her brightest students to share the experience with her.

Shortly after arriving in San Pedro Sula, Honduras, Mary and her students piled into a van and headed to a CI community center in Las Minas. Waiting for them were Walter and his mother — and Edgar, who had traveled to the city with his aunt for the opportunity to meet Mary.

As the group disembarked, Walter's mother greeted each person with a hug, thanking them for coming. Walter had planned exactly what he would say when he met Mary, but when the moment came, he found himself tongue-tied and had to settle instead on a warm hug. By the time Edgar finally met Mary face-to-face, there were more than a few tears in the group.

The first stop on the agenda was Walter's school, where a celebration was taking place to mark Student Day. The Americans were the guests of honor.

The group was ushered to the playground, where chairs had been assembled. After a warm greeting from the principal, they enjoyed a presentation in which students read poetry, sang and danced traditional dances. After the final performance, Mary announced that her students wished to repay their hosts' kindness with a performance of their own. They sang their national anthem to a large round of applause.

Next, the group toured the school, causing a stir of excitement everywhere they went. Along the way they gave away school supplies they had brought, posed for pictures with the excited children, and answered many excited questions. This, the group later agreed, was the best part of their day. 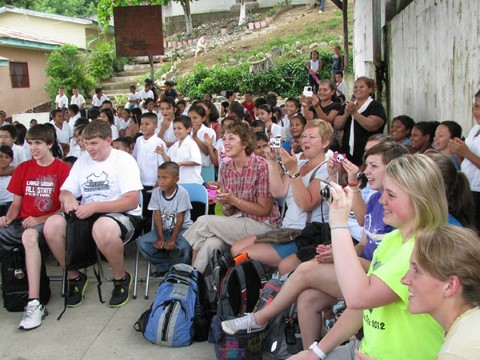 At Walter's school, the group got front-row seats at a presentation held in honor of Student Day.

After leaving the school, the group went to a pizza restaurant. Edgar sat with the American youth — and as they ate, he explained how important sponsorship had been in his life. Mary took the opportunity to give some undivided attention to Walter. After lunch, the group went to a mall so Mary could buy a few presents for Edgar and Walter.

After leaving the mall, it was time to say good-bye. Edgar grew emotional as he hugged Mary one last time. He said that words couldn't express the gratitude he felt for this woman who had helped him overcome poverty as a child. As Edgar and his aunt went their own way, the van headed up into the hills to Walter's home. Another round of hugs and fond farewells took place, and Walter stood in front of his home waving as the van took the Americans back down the hill. 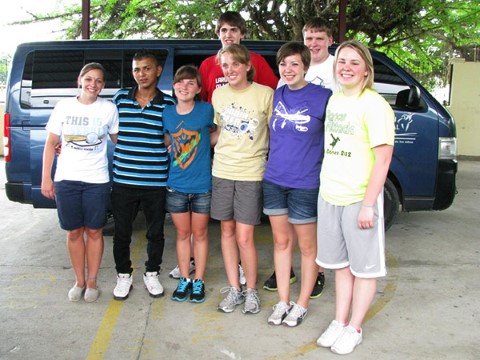 Mary's students pose with Edgar in front of the CI van.

Seeing the relationship Mary and Walter had, the other two chaperones announced that they had decided to become sponsors. Mary's students also planned to start a group sponsorship of a Honduran child, so they might someday return with Mary to meet their own sponsored child.

Sadly, once the visit was over, Mary had to return to the U.S. instead of accompanying her students to the Copán ruins and the beaches of Tela, as planned. Two weeks before the trip, her son had fallen ill. He was still hospitalized, and Mary was eager to return to his side.

The staff found it remarkable that Mary had traveled all the way to Honduras to keep from disappointing the boys. "She came to fulfill her commitment to Walter and Edgar, then returned to her country," said Sayda Paz, Sponsor Relations Coordinator. "I think the situation added more emotion to her visit."

Mary had some final words for CI staff as they dropped the group off at the hotel. "I am so happy, because I wanted to meet Walter — but I also wanted to meet Edgar. Thank you so very much for finding him. I'm so glad to see how impressed my students were by this visit. They are taking home beautiful memories of Honduras."