Divine Mercy, 10 years old, remembers the terrible day she had to flee a volcano. “I felt scared and sad that we had to leave home. I worried about what would happen to our house, our animals and my friends and playmates in the neighborhood,” she says.

In September 2014, Tabaco and Legazpi, Philippines, were rocked by rumbling earthquakes, billowing clouds of deadly sulfur dioxide and increased lava activity. All three events indicated that an eruption from Mount Mayon was imminent. Provincial governments of cities affected by the volatile volcano ordered military personnel to quickly mobilize families — many of whom Children International serves — to evacuate the danger zone. 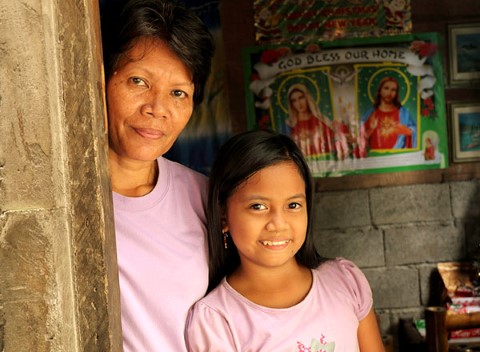 Sponsored child Divine Mercy, her mother, Milagros, and the rest of their family evacuated when Mount Mayon threatened eruption in late 2014.

“We had no choice but to follow because it’s a mandatory government order,” Mercy, 44, mother of another evacuated sponsored child, explains. “We had to pack our clothes and move out from our place to stay temporarily in an evacuation center. It was hard being in a situation where we had to move out […] in order to secure our lives.”

The dangerous allure of Mayon

Mount Mayon dominates the sky in Albay province, its perfect cone draped with wispy clouds. Folk tradition maintains that it was named after the legendary heroine Daragang Magayon, whose name means “Beautiful Maiden.” During an attack, the young woman was shot by an arrow, trying to save her true love; they died in each other’s arms. Their grave, it’s said, ascended toward the sky to become the volcano.

Mirroring its namesake’s legend, life near the volcano is a mixture of beauty, danger and death. Knowing the risks, families reacted swiftly when the evacuation began. Many adults undoubtedly remembered the 2009-2010 eruption that forced 50,000 people from their homes after a record-breaking number of earthquakes and series of ash explosions. For the children, though, leaving their homes was confusing and scary.

Life as an evacuee 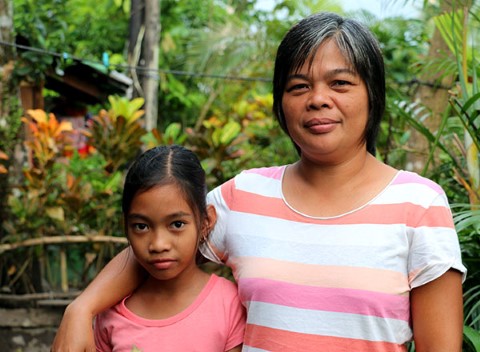 Mercy and her daughter, Girlie, were forced to flee their home in Legazpi, Philippines. They lived in an evacuation center for nearly two months.

Abandoning everything but some personal items and clothes, families fled to government-run evacuation centers. Conditions were difficult. Multiple families shared space in the shelters where lights stayed on all night long. Children would cry for the familiarity of home, worried about the devastation that threatened to rain down on them.

Limited facilities meant long lines for the bathroom. Homemade food was difficult to prepare, so many children went without or ate unhealthy convenience foods. Unspoken fears filled the air, such as the threat of physical violence, sexual assault and abuse.

Children struggled to find comfort and stability in the camp, and the evacuation had left them anxious and frightened. CI responded by setting up child-friendly spaces (CFS) at the evacuation centers.

Used by leading child welfare organizations such as UNICEF, children-friendly spaces provide a quick and efficient method to create support systems for children during a challenging and difficult experience. Although temporary by design — CI typically uses tents — these spaces offer a safe harbor from the potential abuses that frequently occur in emergency housing. More importantly, the activities offered in the spaces create a sense of normalcy for children in trying times. 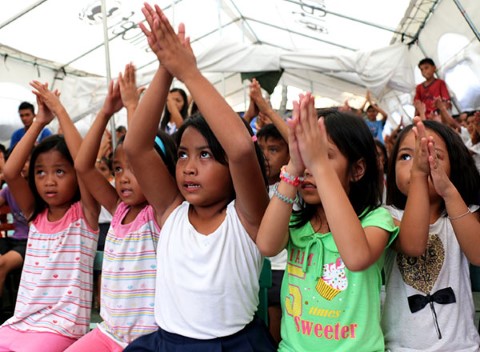 Activities at child-friendly spaces help children stay busy while healing from the trauma of disasters.

Youth volunteers, volunteer mothers and field officers took the lead on planning and offering activities. They read stories to children. In addition, volunteers gave presentations on proper washing and the importance of good health and nutrition, and they entertained the kids with group games and other activities.

"Activities like these serve to lessen the shock associated with calamities like the Mayon eruption. It allows children to play and somehow recover emotionally," says Agency Director Gemma Goliat.

… and opportunities to heal 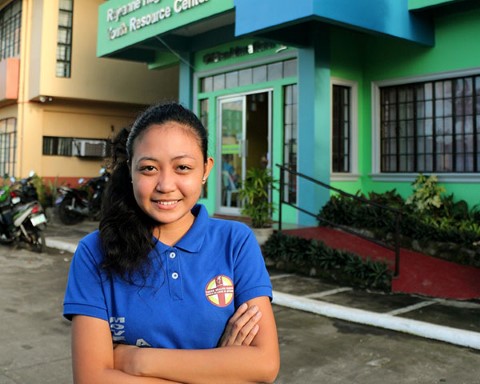 Sponsored youth Analyn was one of many youth who volunteered with younger children during the evacuation in 2014.

Analyn, 18, a youth health volunteer for CI’s Tabaco agency who worked with activities during Mount Mayon’s eruption, explains why children desperately need this type of programming during emergencies. “The children had a difficult time at the evacuation centers,” she recalls. “They were away from their homes, and life was hard. This activity was important and made an impact in a sense that it was able to provide assurance to children that things were going to be okay, and it made them forget their worries – even for a while.”

“Noticing the before and after mood of the children, I could say the child-friendly space was a big help. The activities were able to provide some sense of sanity,” Analyn adds.

Child-friendly spaces are designed to help kids at their most vulnerable. Part of our disaster-preparedness and -response strategy, CI has deployed this intervention several times in the Philippines: in 2013 during the aftermath of Typhoon Haiyan, during the 2014 evacuation near Mayon and in January 2015 when Quezon City was ravaged by fires that left thousands homeless. Supported by our staff, youth and adult volunteers, CFS are a welcome tool to aid the psychological recovery of children in challenging circumstances; we offer training sessions to help prepare them for this important role.

A little happiness during disasters

Conducting a CFS activity for her fellow evacuees was also special for Divine Mercy’s mother, Milagros, who normally volunteers with CI’s Tabaco agency. After her family was relocated because of Mayon, she interacted with children during the story-telling session and with fellow adults in child-protection activities.

"What I will remember the most was that I was part of it," she says. "I was privileged and happy to be a volunteer in helping give joy and education to both kids and adult evacuees. 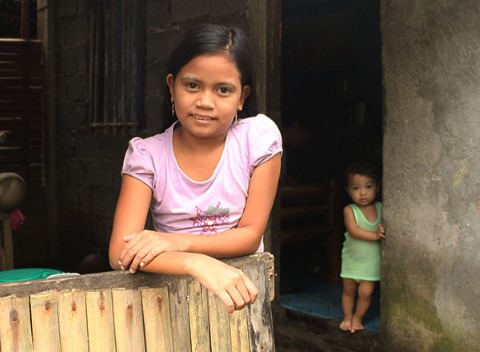 Although life in the center was difficult, the support Divine Mercy received at Children International’s child-friendly space helped make the experience a happy memory.

After the CFS activities, Milagros noticed a marked improvement in her daughter. She said Divine Mercy seemed happier, no longer the sad, worried child she was when they first came to the center. She had even made a few new friends.

As for Divine Mercy, the CFS activity was memorable in other ways. "We got free food. I met new friends. We enjoyed playing, dancing and laughing at the mascot," she says. "I almost forgot we were in an evacuation center."