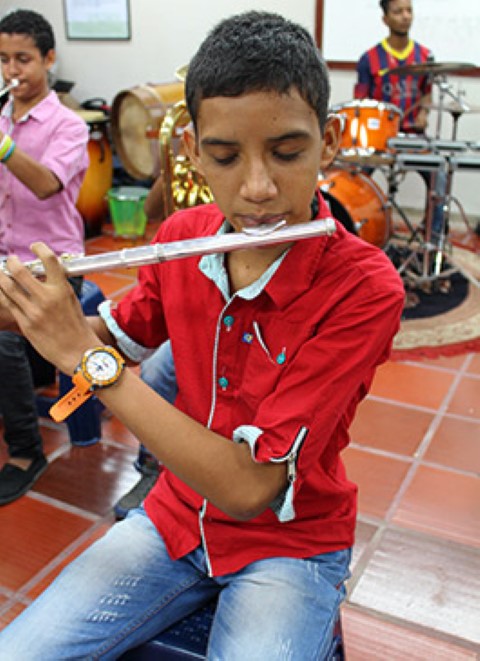 Fifteen-year-old Juan David adores the flute, because he says it is the instrument that is most captivating to him.

Juan David sits down on the blue plastic stool in the multipurpose room of the Malambo community center in Barranquilla, Colombia. He gently places a black case on his lap. The 15-year-old chats with another student as he opens it, revealing the shiny flute on loan from the community center. He reaches in and carefully removes it, taking care to thoroughly clean each component before putting the instrument together.

“My favorite instrument is the flute. When I’m playing, I feel very peaceful and calm, because I leave my world behind,” Juan David says later. “I leave my problems behind, and I can just concentrate on myself and the music coming from my flute.”

Class begins. He puts the instrument to his lips and, along with the rest of the orchestra, he begins playing chords, tapping his feet to keep tempo.

Although the Children International Colombia Wind Orchestra has been around since 2002 (originally called the Blizzard Orchestra), funding proved challenging each year. Now, thanks to a new music program funded by The Sally and Dick Roberts Coyote Foundation, in association with the film and website, “I Am a Fine Musician,” kids in Barranquilla no longer have to worry whether their orchestra will be able to continue. The Foundation partnered with Children International last March to fund the Music for Development program in both Barranquilla and Santo Domingo, Dominican Republic. 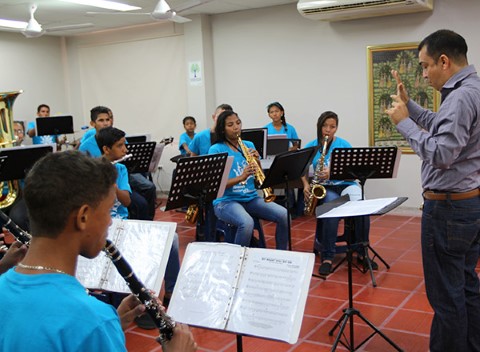 Our program is based off the El Sistema method, which teaches more than just music appreciation. The program uses the transformative power of music to teach youth life skills and social responsibility. Music gives them a sense of purpose, achievement and responsibility.

The El Sistema music program is the brainchild of Venezuelan musician, politician, economist and philanthropist Dr. José Antonio Abreu. At the root of the philosophy is the idea that music education — specifically classical music education — can be used as a means of uplifting and unifying an underserved community, starting with the youth. His curriculum has inspired similar music programs in more than 25 countries around the world. A unique aspect of the El Sistema curriculum is the peer-to-peer instruction, in which even the youngest students take on teaching roles. This cultivates leadership skills and the habit of helping others.

Through Music for Development, kids are learning teamwork, leadership and study skills. It builds self-confidence and encourages creativity. The long practices, which include rehearsals for both the orchestra and a vocal ensemble, also keep youth away from destructive environments and behaviors, such as gangs and drug use.

“Not only do we teach music but also how to live,” says orchestra director Juan Carlos Natera. “It’s especially important that they feel very full of life with the desire for success and, more than anything, to dream, because I firmly believe that music goes far beyond music notes.” 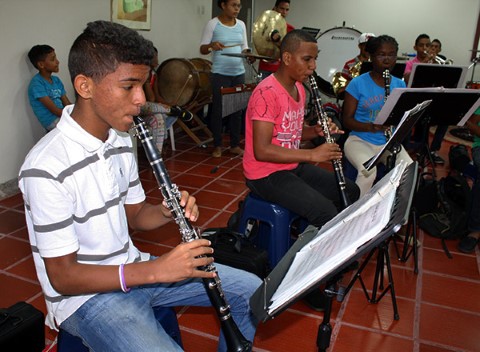 About 90 students, ranging in age from 8 to 19, make up the CI Wind Orchestra in Barranquilla. By the end of 2018, organizers hope to include 140 kids and youth in the program. The orchestra is open to all kids in the sponsorship program, Juan Carlos notes. “There are no requirements to join — only that the child has the determination and the desire to learn an instrument and to be in this lovely music project,” he says.

Being in the orchestra is quite a time commitment: Students practice for four hours up to four times a week, and they are encouraged to attend as many rehearsals as possible. Each class includes music introduction and appreciation, social learning and how to read sheet music. Students practice in groups, and then the entire orchestra rehearses together.

“I’ve seen incredible progress musically,” Juan Carlos says. “Some of these kids … are now playing instruments they had never even seen in their lives, like the tuba, piccolo and clarinet. Most of all, they have improved their self-esteem. They feel happy, delighted, useful and musical. Also, their families feel very happy, because they are in this great music program.”

Thanks to the frequent rehearsals and performances, the kids in the band have formed a close bond with each other and with their teacher. “A lot of the students don’t want to leave when their time is up,” Juan Carlos says. “Because of the unity that we have here, we’ve formed a family. That’s when the magic in the orchestra at Children International is born and emerges.”

Since joining the orchestra last February, Juan David says he has gained self-confidence thanks to the peer-to-peer teaching process. He also has learned personal responsibility, respect for his elders and how to focus.

The teen admits that before he joined the orchestra, he never understood the appeal of music. “I approached music as if it were a distraction,” he explains. “I didn’t really know the knowledge that I possessed inside.”

But, on a whim, he went to the practice with a classmate and was immediately captivated. Now, he can’t imagine life without music in it.

“For me, music is just as important as my basic education and my career,” he shares. “It’s the feeling that, the moment it hits my ear, it makes me express all of my feelings. I would feel not just a little bad, but very bad [if I could never play again]. It’s not just that I live for music and that I love it, but it’s like half my life.”

Music education has been show to dramatically improve children’s lives. See how Children International’s approach brings the discipline of music study to children in need.