Power of ONE: Living proof of the power of (every)ONE

Google Jon Sink’s name and one of the first results you’ll see is an article about his 5-year-old daughter and her lemonade stand.

Not just any lemonade stand, mind you — but one that ultimately has raised about $27,000 for a nonprofit in Topeka, Kansas, called Planting Peace. 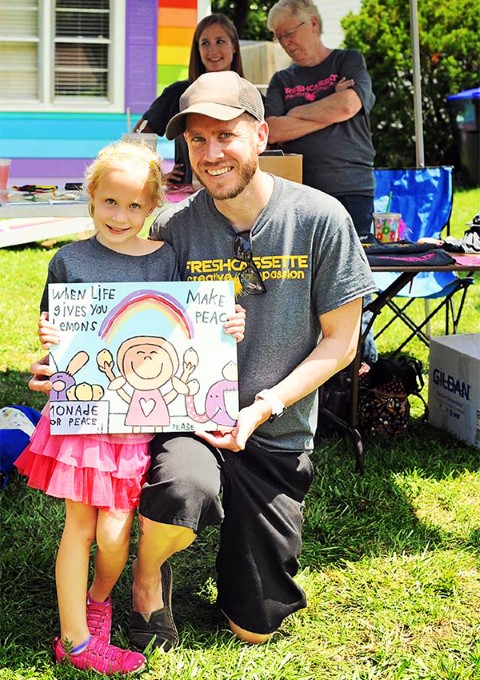 Jon and his daughter, Jayden, spent four hours outside the Equality House, right across the street from the Westboro Baptist Church, in Topeka, Kansas, raising money for Planting Peace.

She apparently has learned from the best. Her dad, Jon, a business analyst at Children International for the past two years, is a successful fundraiser in his own right, having completed several projects for nonprofits. For example, he’s:

These days, Jon is happy managing his art gallery, Clubhouse by Freshcassestte, in Kansas City’s hip Crossroads art district. He donates proceeds from his gallery’s sales to local nonprofits. In August, the gallery is partnering with CI to host a photography show during a monthly First Fridays event, where you can see an amazing collection of authentic photos from the communities where CI works. 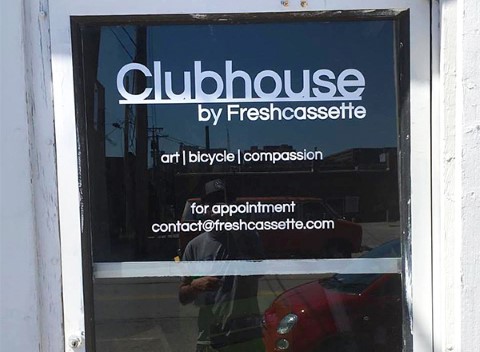 We asked Jon to explain how he has managed to raise $60,000 for international and local charities over the last five years.

Why did you decide to begin fundraising for nonprofits?

Roughly five years ago, I was making some music and art. Instead of selling it, I gave it away for free and asked people to make a donation to a charity if they liked it. At the time, the charity was World Bicycle Relief, which sends bikes to people primarily in African countries for transportation.

Eventually, we bought 10 bikes. The fundraising experience went better than expected — it was encouraging. Then a lot of my friends in the art world said they wanted to do something like that. So I started a little project called Freshcassette.

What was the next project you raised money for?

I wanted to do something bigger, so I decided to raise money to build a water well in the South Sudan through The Water Project. The goal was about $7,000, which I raised in about seven months through art sales, art auctions and donations. All of the fundraising was being done through social media and my website. 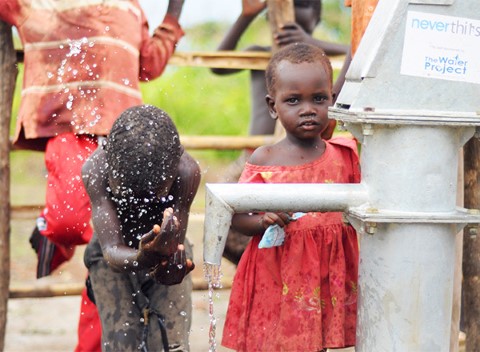 For his second big fundraising project, Jon raised money for a clean-water well in South Sudan.

One big part of that fundraising effort, though, was a contest through the Muhammad Ali Center. The foundation was having a contest where you produce a video about what you’re doing creatively to make the world a better place. I had never dabbled in that kind of medium, but I entered and won second place, which provided $1,000 for the charity of my choice.

After you completed that fundraising project, did you immediately jump into a new one?

No, I had a normal day-to-day job (at an insurance company), and then I’d spend all night on my laptop doing stuff for Freshcassette. Every dollar that was raised was donated. All the expenses were paid out of my own pocket.

Plus, at that time, my wife was pregnant with our second child. I thought I should take a little break.

"I never understood how something goes viral until it happened and I was in the middle of it."

Where does the lemonade stand fit in to all this?

The Equality House, which is across the street from the Westboro Baptist Church in Topeka, debuted in March 2013. When that happened, it went viral. I found it and thought it was awesome and showed my daughter. Imagine a 5-year-old seeing a rainbow house. She fell in love with it!

I was planning to take three weeks off work that summer when my son was born to spend time with my daughter. She told me she wanted to do a lemonade stand, and we decided to donate the money raised to the organization that runs the house. I spoke with Aaron Jackson, one of the founders of Planting Peace, who invited us to host the lemonade stand on their lawn.

Jayden and I were out there for about four hours one Friday afternoon. While we were there, a group of about 25 guys from Fort Riley drove their motorcycles down and bought lemonade. Aaron called a local radio station and the local paper, too, so journalists came out and interviewed us.

At the end of the day, we sold about $200 worth of lemonade. 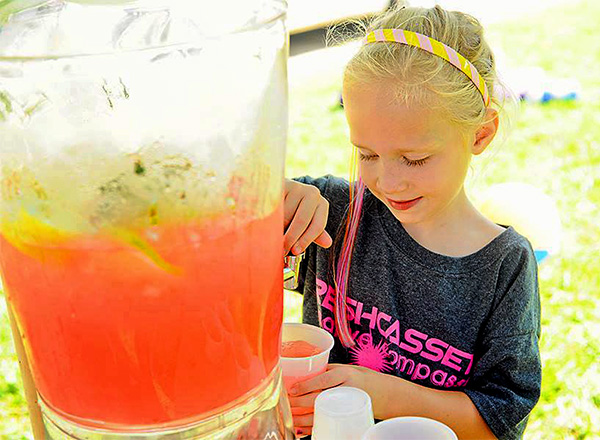 Aaron set up a Crowdrise site specifically for the event and then promoted it on Facebook.

On the drive home afterward, my phone rang. It was Aaron. He said, FYI, he just got off the phone with people at the Huffington Post. Aaron pitched the story to them, and a writer wanted to interview me that day. So I talked to them for a little while and that was that.

The next morning, I had about 50 texts and voicemails. On the Huffington Post homepage with my daughter’s picture was a giant headline in pink letters that read, “5-year-old takes down the Westboro Baptist Church.” Then tons of other media outlets got in on the story.

I never understood how something goes viral until it happened and I was in the middle of it. And within a week, the amount raised was over $20,000.

I bet that was a pretty crazy experience for your daughter. Did that event spark a love for philanthropy?

Yes, and we did a few more local lemonade stands that summer and then went back to Topeka in August. She’s 9 now and still wants to do a lemonade stand every summer. We just did one a few weeks ago and raised $300 in two hours for The Kansas City Anti-Violence Project.

I think the experience was an awesome teaching opportunity. We kind of stumbled into it accidentally as far as how big it got, but it was amazing for her. She’s going to grow up having that compassionate heart and wanting to help people basically because we started a lemonade stand. 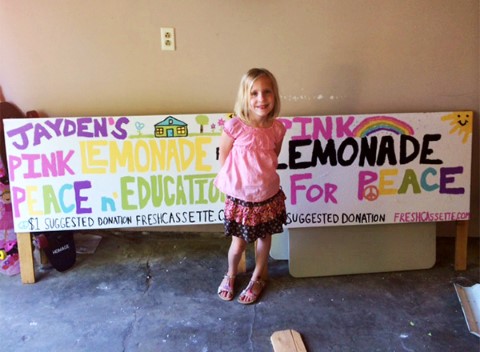 Jayden has been bitten by the charity bug! Three summers later, she continues to raise money for other nonprofits through her lemonade stands.

She’s going to grow up having that compassionate heart and wanting to help people basically because we started a lemonade stand.

"Everybody can help someone who’s not as fortunate as they are."

What other projects have you done since?

After the dust settled on that, I got really ambitious and wanted do something really cool. So I raised money to build a primary school in Bagad, India, through Free the Children (now called WE). We finished that fundraising about a year and a half ago, and construction was completed a few months ago. It was very rewarding to do that. It was also exhausting, because you can only ask your artist friends so many times for a donated painting. 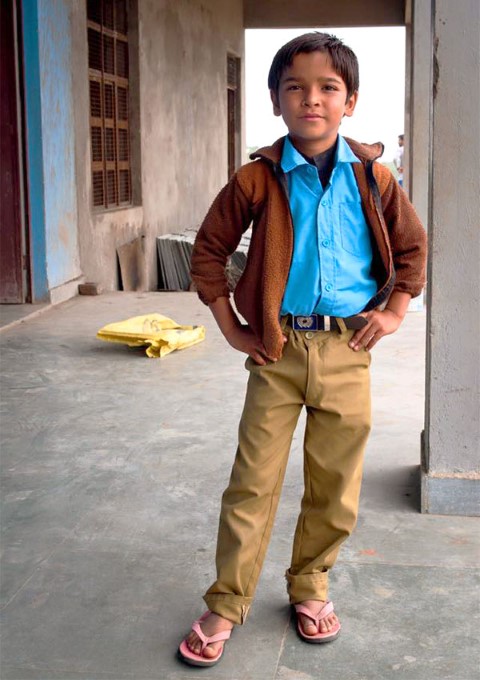 A kid in India stands in front of the new primary school in Bagad, India, that Jon funded.

Are you planning on doing any more big projects like that?

Not right now, but maybe in the future. Because that’s really where the excitement is.

What prompted you to open an art gallery in the Crossroads?

While the Free the Children project was wrapping up, I began restructuring the organization. Before, it was more like a hobby. I wanted to take a break and legitimize my company.

An acquaintance had stumbled into an art space in the Crossroads a couple of years ago. Last year, he offered to let me host a First Fridays event there. It went well, and then he invited me to be a partner with him. The space is called Clubhouse by Freshcassette. 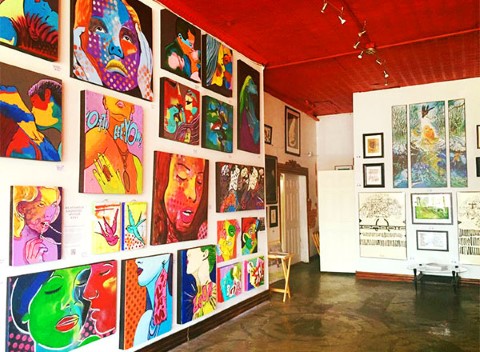 Now, I’m taking a step back on the big fundraising projects for a while. Instead, I’ve decided to give money to charities. Through trial and error, we have a good model that donates 20% of our annual profits to nonprofits.

But I don’t make a dime off this. Even though I built a legit for-profit business, the money either pays bills or goes to charitable organizations. And artists like showing there because they make money on their work, but they’re also helping people in the process.

What types of nonprofits are you working with now?

We give to some local and international organizations. Some of the local ones are:

Three months ago, the gallery started sponsoring a 7-year-old child through CI. Her name is Marcela, and she’s from Honduras. 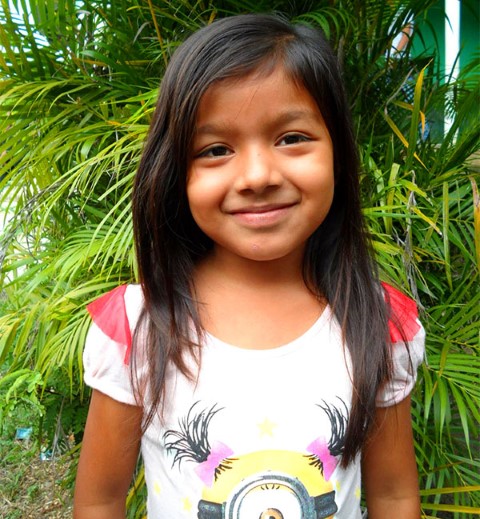 We talk a lot about the power of (every)ONE around here, and you pretty much are living proof of that concept. It’s all about the ripple effect.

Everybody can help someone who’s not as fortunate as they are. There’s at least somebody who has it worse off than you do. So lend a hand. That’s been my motto through this whole thing.

I started this to help people who need help. I think if everybody adopted this “help someone” mentality, the world would be a better place.

Do you live in the Kansas City area? Make plans to visit Jon’s gallery at First Fridays on Aug. 5! If you’re too far to visit, please share the event on Facebook! 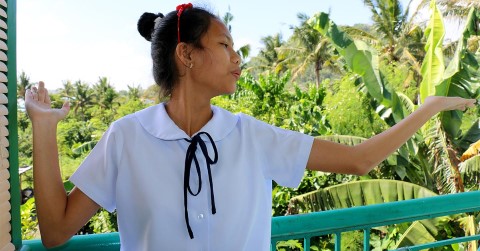 Power of ONE: Together we can soar 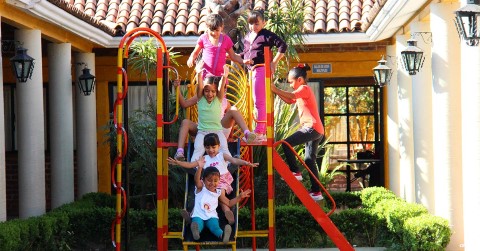 Power of ONE: From adversity to advocacy 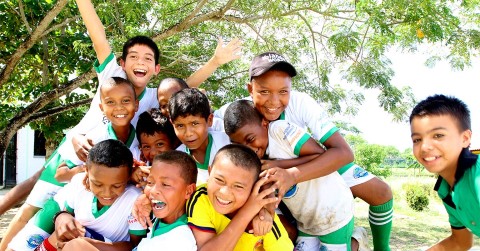 Power of ONE: Every person is a link in the chain