A badge of honor 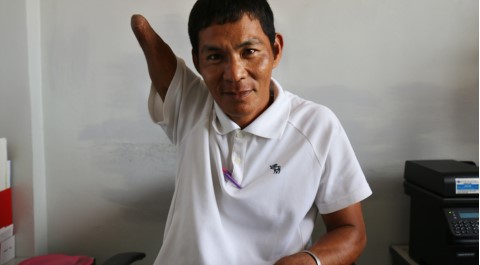 About 20 years ago, Gerardo — now in his 40s — worked for a printing company in the Philippines. He operated a machine that rolled paper into large spools. Gerardo was happily doing his job one day when he saw his coworker slip. In an instant, the man would be pulled into the rolling mechanism. Gerardo pushed the man aside, likely saving his life. But, in doing so, the machine seized Gerardo’s hand, pulverizing it.

Gerardo survived, but he lost his right arm just above the elbow.

Before you feel sorry for him, though, you should know this: Gerardo thinks of his missing arm as a trophy. After all, he saved someone from death. And instead of slowing him down, this challenge has enhanced the quality of his life.

Gerardo and his wife, Julie, have three children in CI’s sponsorship program. Shortly after Christian, the oldest, became sponsored in 2003, Gerardo began performing volunteer work at our Manila agency. His initial task was to ensure the families he oversaw — in an area spanning several large blocks, including his own neighborhood — made it to the community center on days they were scheduled for medical and dental appointments, to receive family assistance and gifts, and to have pictures taken or write letters to sponsors.

He enjoyed how cheerful the kids were and how happy parents were to see him, because they knew he was bringing good news. “I felt good about what I was doing,” Gerardo says. “I am happy that I am able to help not only my family but many other people. It was also another opportunity to inspire people, to show them that having a disability is not a hindrance to helping other people and to making them happy.”

“Being able to help others makes me happy,” says Gerardo. “One does not need to be rich to do that.”

About five years ago, Gerardo became even more committed as a CI volunteer when he agreed to help with facilities maintenance activities. He is now one of the trusted people who helps keep the community center sparkling clean for staff and families. A general handyman, he also repairs what needs fixing, such as door handles and basic plumbing.

A role model — in and out of CI

In keeping with Gerardo’s badge of honor (his missing arm), everyone who knows him refers to him as Putol, meaning “amputee.” He doesn’t consider this moniker to be at all derogatory. In fact, at least part of Gerardo’s great attitude is explained by the fact that he has become a competitive athlete – something he never imagined before his injury.

A missing arm doesn’t slow down Gerardo, seen here assisting with the distribution of emergency relief supplies in Manila after a typhoon struck the island nation.

“I began about six years ago when there was a provincial training for differently abled persons,” says Gerardo. “I first trained in marathon, javelin throw and discus throw.” He’s been training daily ever since and has recently added shot put, swimming and tennis to his repertoire. Interestingly, he trains for swimming in the river beside his home.

In addition to providing further inspiration to others, Gerardo’s athletic endeavors also give him the opportunity to travel around the Philippines and even to earn a little extra income. The local government occasionally provides him with monetary compensation for representing the Manila area. “In 2014, I won the gold medal in shot put and the bronze medal in javelin and discus throw,” he says, flashing his infectious smile.

When asked what brings him the greatest happiness, he doesn’t hesitate to answer. “My children,” he says, beaming with pride. “They are doing well, have good grades and we have time to spend together. They are amazing children,” Gerardo adds. “I always remind them to grow up as strong and brave individuals and to never forget the people who helped them get through, like the staff and their sponsors at Children International.”